How to tell a VH Pacer from any other VH

The following is not a complete list, but gives you enough information to decide if that VH Sedan you are looking at is a Genuine VH Pacer or a Ranger in disguise!

The first place to start is the body number. On the inner guard of the driver side of the car will be a body number. If it is a genuine VH Pacer, the code will be 7-S-41 then a body number between 1 and 1647. It will also be stamped on the compliance plate which is located on the drivers side of the firewall; examples below. 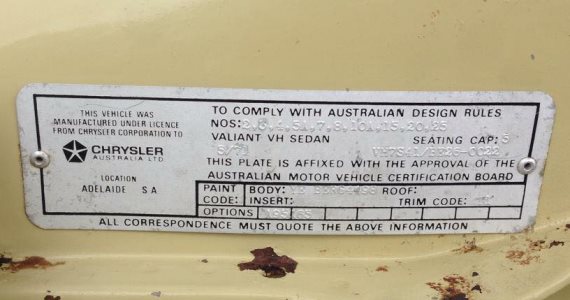 The engine number on a Hemi 265 can be seen on a flat lip on the block facing up behind the distributor cap - again on the drivers side of the car. If it's a genuine VH Pacer engine it will start with one of the following prefix's:

Note that the VH R/T 2bbl Chargers and the VH 770 Regal sedans also had engines with these prefix's so the prefix doesn't guarantee it's a VH Pacer block, though if it doesn't have one of these prefix's then its not a Pacer engine. Saying that, there are a few exceptions to the rule, where the fourth character will be a 1 (a rare factory automatic vehicle) or the third character being a 5 or 6, meaning it was one of the four factory 'E spec' cars (E37, E38, E48, or E49).

Most of the distinguishing features of a Pacer are the exterior decals and striping. This can best be seen from pictures on the site. This includes the black striping that wraps around the rear of the vehicle and down the sides to the front doors. Some vehicles (with the A65 option) also have the bonnet black outs. The exterior decals include the Hemi 265 sticker on the bonnet (in the centre at the front), the Hemi Pacer decal on the left hand side of the rear of the vehicle, between the left and right brake and indicator lights, and finally there is the 265 Hemi decal that goes in the striping on the rear side panels of the car.

Although the VH Pacer was factory fitted with Chryslers 6.5 inch sports road wheel, a lot of people have changed these for the more popular 'jelly bean' styles sports wheels. A limited number of vehicles did have these factory fitted (the same as the R/T Chargers) and will have a W35 option on the ID plate.

The trim levels and chrome did differ across the VH range, but many pieces were interchangeable. The Pacer was by no means the most expensive car in the VH Range - more the less flash more dash vehicle. It was definitely flasher than the Rangers, but not as plush as the Regals.

The standout feature of the Pacer interior is the Pacer instrumentation, which is also shared with the R/T Chargers, and the bucket seats. If the A95 option was present the seats were reclining and a 3 spoke steering wheel was fitted. Many vehicles with A95 also have the Z98 option meaning to delete the 3 spoke steering wheel due to factory shortages at the time. Later as the steering wheels became available a lot of dealers fitted them on delivery due to their popularity with customers. A few other things to look for include the Hemi Pacer badges on the front door trims, the unusual 3spd/4spd gear knob that looks like the head of a golf club, and the silver vertical striping on the door trims. Note that if it's a late build Pacer (last 300 or so) it will probably not have the silver striping as it is rumoured that Chrysler ran out of stock during production!

Under the bonnet, there is another few telltale items to indicate the vehicle is a VH Pacer. This includes the Hemi 265 decaled 2bbl air cleaner which is slightly different to a standard VH one, and factory extractors / split exhaust. These function remarkably well, but have a tendency to not seal very well.

If you notice a large brake booster on the firewall under the ID plate its worth checking to see if the car has the B51 option, indicating that it was factory fitted.

I hope this helps. Please feel free to email us with any questions or queries or further information you would like to share! For more information about pacers, please see our information page.

Important information about ads: This site has been running for 20 years, providing information about Chrysler Valiant Pacers. The site has never made a penny (it was never intended to do so) and was built for the love of Pacers, however it has always cost money to run. In 2018 I put some ad's on the site to see if the website can somehow cover its costs and so far the ads look like they'll cover about 50% of the annual running costs. If you see an ad that interests you, please click on it, as it will help! Just seeing ads does not achieve anything, and so if you would rather not see any ad's, you can click here to not see any more. It looks like you've opted to not see any ads, which is fine, but if you want you can turn them back on here.